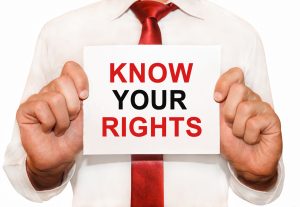 It can be really frightful when a person is charged with a crime. When this does happen there are specific legal rights that the charged individual has.

It doesn’t mean that if you are “charged with a crime that you will immediately be put under arrest and put in jail. The police can take this action but they also can decide to not arrest and hold you. Instead they may let you go free with the understanding that you will have to attend court. They may also set other conditions if they take this step.

Your legal right is to receive a written copy of what you are being charged with. This is called a charge sheet.

One of the things you may have to do in order to stay out of jail is come up with bail. Bail is money that is given to the courts in escrow to ensure that you will attend your court hearings. Being released on bail is not a legal right, but it is a legal right to be brought before the courts so it can be determined if you can be released on bail that is set by the magistrate.

Recently a new rule regarding bail has been brought into effect for Wales and England. This is the 28- day rule.

Even if you are not held in custody or bail has not been set you have the legal right to seek out a lawyer and obtain the proper legal advice. Most often when it comes to the law the legal rights vary depending on the age of the individual. In most cases, those under the age of eighteen have some legal rights that those over eighteen don’t.